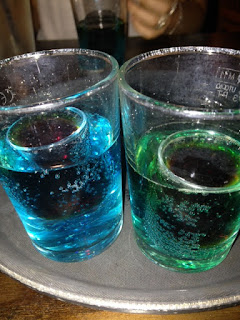 Posted by enterpriserecruitmentblog at 10:38 am No comments:

'Surprise Cake' by Callum
Apparently this cake took Callum ages. It began with him having to look up how to make a sponge. His cake method was then as follows: "put the ingredients in a pan (a pan??) and cook for 15 minutes (FIFTEEN minutes? surely that's the quickest-cooking cake in the world?)". He played Fifa while it cooled (this is why the cake took ages me thinks). Anyway, back to the cake, he made 2 plain sponges and 1 chocolate one (using cocoa powder). He cooked the chocolate sponge for less time (less than 15 minutes???) because, he claimed, that's how he likes it.

To make the filling, he melted 2 Galaxy bars (he's spoiling us) in a pan over simmering water. Once melted, he added water and icing sugar. It looked awful. He put it in the fridge. It looked better. He added a bit of milk to it. The top layer icing was a different method - icing sugar and oil (that's just weird).

The 'surprise' came from the centre. Callum cut a hole in the chocolate sponge, poured in chocolate buttons with the notion that all the buttons will spill out of the cake when cut - "SURPRISE!". It didn't work. The buttons were wedged in and most people didn't get so much as a sniff of one.

The Verdict:
It was Marmite. Some felt it was a very good cake for Callum's baking ability level and that it tasted really good. Others said the plain sponges were dry and Katie said her slice tasted metallic. Opinions included:
"All that effort - I like the chocolate buttons. It's a bit messy". "I really enjoyed it, but he's not given it his full attention if he's playing Fifa". "Looks-wise, it's rustic with the occasional coco powder taste". "Inconsistent icing - a bit willy-nilly".

Next time: Greg's up. He's never really made a cake before. 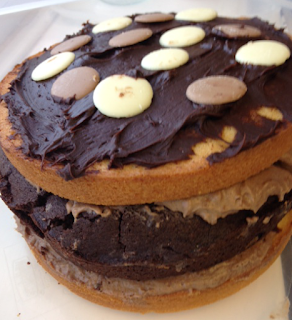 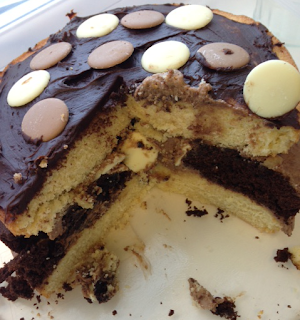 Posted by enterpriserecruitmentblog at 12:56 pm No comments: