We race (electronically) and the loser has to bake a cake to feed the office.
Why? because we like cake.
Who? everyone in the office. No one gets out of it.
When? 1st Monday of the month.
The rules: you make the cake yourself, without any help. You can't 'repeat' a cake. Your cake will be judged on presentation, difficulty and taste, and marked out of 10 by each colleague.

'Giant Chocolate Sponge' by Jess. Jess volunteered herself for this additional Cake Monday to prove that she could indeed make a cake and, I quote, "redeem herself".

Initially, Jess "forgot" all about her promise of this Cake Monday & then claimed she was too busy to be able to bake one by today. To cut a long story short, she did produce a cake for the office today. First impressions - we were impressed, it was straight out of the oven and still warm. It looked good (although some felt that the sheen from the icing gave it a melted plastic look). First impressions over, we very quickly realised that this wasn't a cake baked using ingredients, this was an out-of-a-packet cake. She added water to a powder mix. One saving grace was that she made the icing and spared us the decorative disney rice transfers.

The Verdict: It was warm. People were reluctant to come forward to sample the cake. The mixture was raw in places (George spat hers out). A couple of people did like the cake, but the majority were unimpressed. 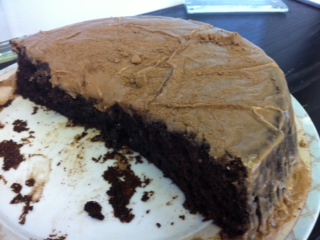 Next month: Jamie - his first Cake Monday bake.
Posted by enterpriserecruitmentblog at 2:12 pm