Raspberry Bakewell Cake by Callum.
Usually, people come in and describe how much of their Sunday was consumed by making the cake (and not in a good way). Callum hasn't made a cake before, but described the process as follows, "put all the stuff in the bowl, used one of those hand whizzers, put it in a baking tray and chucked in raspberries". It took an hour in total, 45 minutes of which, the cake was in the oven. Once baked, he placed almonds on the top and sprinkled on icing sugar. He was particularly pleased that the raspberries hadn't sunk. Job done.

The Verdict:
Everyone enjoyed the cake, it was delicious. Callum had executed it well - only Sue complained of a soggy bottom. We liked the raspberries. We liked the flavour and texture. Simplicity was his downfall. He had overlooked the fact that cakes are marked for taste, difficulty, and presentation. Andrew complained of density and a burnt bit (but we all knew that the route of his complaint was really linked to the fact that the cake didn't contain chocolate), and whilst everyone scored it as highly as they could, there was a ceiling to those scores because of the processes involved (or lack of). That said, we must not forget that this is Callum's first ever cake and he nailed it, even if initially we were put off because it brought back memories of Jamie's dry fruit cake. 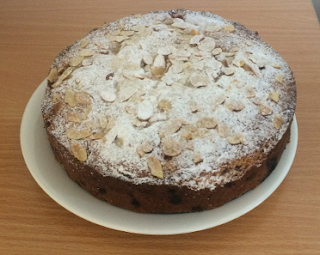 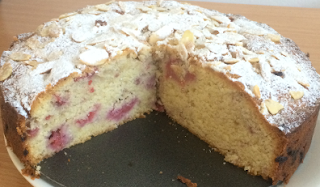 Next time: Angry Adam. (The selection process was time consuming and then incredibly rushed).

Posted by enterpriserecruitmentblog at 1:12 pm