Fully expecting Dom not to have made his cake over the weekend, scepticism was on red alert when he brought in his cake this morning, particularly as it looked quite tasty....

So anyway, Dom melted dark chocolate with butter over hot water. Placing sugar in a separate bowl, he then folded in the melted chocolate. Eggs were whisked and added into the mixture, as was sieved flour and crushed white chocolate. The mixture was poured into the tin and baked for 45 minutes. He dusted some icing sugar over the top "for Christmas".

The Verdict:
Considering we were expecting a packet-mix, the cake tasted decent. Everybody liked it and the general consensus was that it worked; it was nice and gooey and sweet. It was a bit heavy for Sue, and a bit too sweet for George and Greg, but Jamie was inspired and reckons he might make it at home for the kids (Jamie loves a cake that doesn't need to rise). A very solid first attempt for Dom - he secured the highest marks people felt they could award given the simplicity of the cake.

Chocolate Brownie Average Score 7.25
Next time: he doesn't even like cake. Adam will be baking, but this will be the last time for a year. 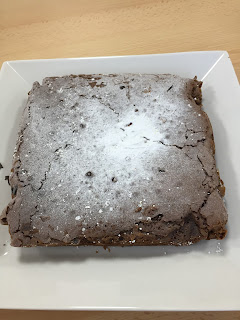 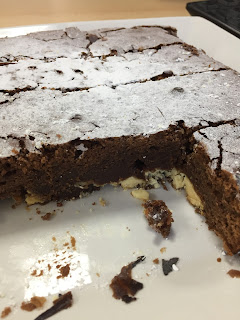 Posted by enterpriserecruitmentblog at 1:26 pm