November's Cake Monday was delivered early (in October) and a tart was delivered rather than a cake, but since a homemade pastry before 9.30am on a Monday morning is always a good thing no one complained.

Callum borrowed Greg's recipe book for his Cake Monday selection. Knowing how complicated Greg's cakes have been, we thought this was a bold move for novice baker Callum.

This bake involved pastry-making. He mixed butter, flour and salt til it looked like "sand". It then chilled in the fridge for a bit. Then he added water to it, mixing it up to form a block of dough. Back into the fridge it went (I know! I'm sure he read that wrong on the recipe too). Next he formed the dough into a disc shape and rolled it out with a lemonade bottle (he couldn't find the rolling pin). Into the tin it went, with baking parchment and beans for a 'blind bake'. For the filling, he whisked golden syrup, double cream and sugar in a bowl. Vanilla extract was meant to go in at this point, but he didn't have any (well, he did, but it was dated 1994 or something). Pecans were scattered over the cooked pastry followed by his liquid syrup mixture which he poured over the top to fill the tin. It was baked in the oven for 30 minutes and was meant to be served with cream (another missing ingredient). Callum was concerned however as he cut into it to serve it up that the ratio of filling to pastry looked a bit too equal...

The Verdict:
Greg's book is amazing. It tasted good. Adam didn't know what a pecan pie was meant to taste like, but said it tasted like a lot of pastry. We generally all really liked the taste of the pastry, which was very buttery and delicious, but it was a bit thick and it probably wasn't totally cooked through because of its density. That said, this didn't appear to deter people's opinion of it too much - it was a very good solid effort from Callum. Greg, Katie and George all said that Callum's pecan pie was much tastier than the one regularly consumed from Simmons Bakery in town!! Katie also pronounced Callum's cake better than George's Banoffee Blondies which had been her favourite cake. Katie and George couldn't fault the Pecan and awarded 10s! Callum is now out for a year with his highest score yet! 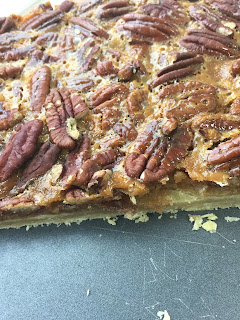 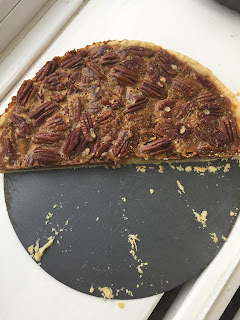 Next time: Elusive-Sue we call her - 2 years and desperate to bake for Cake Monday, but no, once again, her dreams can't be fulfilled. Dom lost the race and bakes for December.

Posted by enterpriserecruitmentblog at 2:33 pm